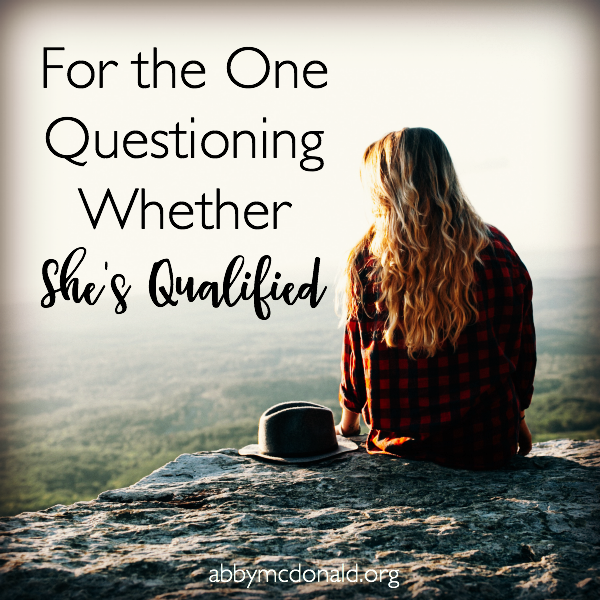 “Sometimes I feel like we’re just the wannabes. Like there’s this higher level of writers and we’re the outsiders.”

I nod my head in agreement as I listen to my friend on the other end of the line. My eyes are wet with understanding. Every day I put the pen to paper or hands to keyboard I fight this battle.

What do I have to say? Hasn’t it been said before by someone more qualified than me?

If I listen to the voices of defeat telling me none of it matters, I will stop before I even begin. My list of qualifications will keep me stuck. Often, I talk to others who struggle with the same feelings of self-doubt.

If I was a real speaker or writer or musician, I would get paid more.

A true artist would have a gallery displaying her work.

If I was really an actor, I would have a more impressive portfolio.

Our lists steal our joy and tell us if we were the real deal, we would be more credentialed. We forget that some of the greatest achievements come from small beginnings. We forget that our greatest qualifier is God, who takes our offering and turns it into something amazing. When we’re obedient, he equips us in ways we never envisioned.

A simple step of faith can turn the unqualified into the empowered.

Do you need evidence? I did. And a few nights ago, I had the opportunity to witness an act of bravery that I almost missed. A courageous woman threw doubt aside and did what needed to be done.

I took my son to see a live performance of Mary Poppins, our first play together. We savored the singing, dancing and choreography, all which went off without a hitch. The surprise came the next day when we arrived at church, and a friend we’d seen there asked how we enjoyed our evening.

As I gushed about how impressed I was, he revealed a secret. The star role of Mary Poppins was played by a replacement. She wasn’t even in the original line-up of actors.

My mouth gaped as I recalled the stellar production and confidence of the main act. I was amazed.

The original cast member broke her ankle midway through the schedule of showings and was unable to perform. But can you imagine what would have happened if the replacement had said “no?”

I’m sure she felt unqualified. She was not an actor, but a choreographer. The play required her to sing and display abilities which were likely out of her realm of expertise. Yet, she put aside her uncertainties and doubts and said, “Yes.” And the result was phenomenal.

The outcome was an audience full of people who didn’t know her from the original cast member, who gave a standing ovation when she floated onto the stage.

If we see ourselves as wannabes, our audience will too. But if we claim our call as bona fide, others will follow suit.

Will there be naysayers? Yes, always. But would you rather let a few negative people keep you from achieving your dreams, or go after it with everything that you have?

If you’re hiding behind a list of qualifications you think you need to claim what’s yours today, it’s time to step into the light. God did not call us to hide in the darkness. When we step out of the shadows, others will take notice. And what they say may surprise you.

Do you ever notice after your kids spend a few day

I am so excited about this edition of Summer Readi

Like most other parents right now, I have more que

It’s the question every parent with school-aged

When an author’s book meets a reader where she i

I saw our neighbor on a walk today and she comment

For this edition of Summer Reading Saturdays we ar