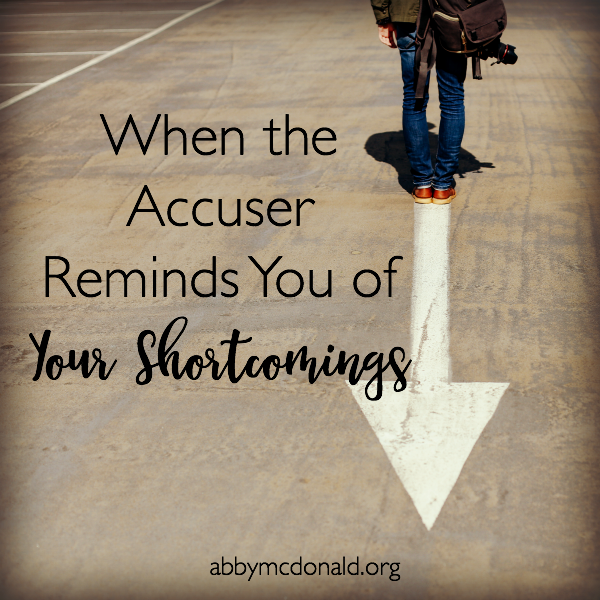 I used to think once I reached a certain point in my walk with Jesus, all my insecurities would melt away. In my mind, I would become sort of like non-stick cookware. Each lie and accusation the enemy tried to throw at me would slide off, and I’d never give them a second thought.

Unfortunately, I’m learning the complete opposite is true. The bolder we become and the more we seize God’s call on our lives, the more our enemy wants to derail us. He will stop at nothing to distract, thwart God’s plan and make us give up. Why? Because when we’re sitting on our sofas, doing nothing, we don’t pose a threat.

He doesn’t oppose the complacent. He opposes those who desire change. Those who want to make a difference in the lives of souls who are lost and weary.

But there’s good news too. Yesterday, God showed me how Satan uses the same methods today that he used thousands of years ago. He’s determined, but he’s not original. In Zechariah 3, the Israelites are returning to Jerusalem after years of captivity in Babylon. God has chosen a high priest, Joshua, and he gives Zechariah a vision about what will take place in the future.

In part of Zechariah’s vision, Joshua has two people standing before him. An angel of the Lord and Satan. By all standards of righteousness during the time of the law, Joshua is the holiest person in the land.

And yet Satan stands there accusing him.

“Then the angel showed me Jeshua the high priest standing before the angel of the Lord. The Accuser, Satan was there at the angel’s right hand, making accusations against Jeshua.” Zechariah 3:1 NLT

This wasn’t a person the Lord had cast out or condemned. This was someone he’d called to lead Israel, who he was going to use to mighty things is his name. And yet, the enemy was right there, ready to pounce. Ready to derail God’s plan and plant reminders of every past failure.

When the enemy accuses, God does three things:

Joshua did not choose himself. He’s not standing there because he’s completely free from sin and has never made a mistake. He’s there because God chose him. God saw his heart, and deemed him worthy of leading a nation.

“I, the Lord, reject your accusations, Satan.” Zechariah 3:2 NLT

When Joshua first arrives on the scene, he is in filthy rags. His rags represent his sin. But instead of reminding him of who he was, the Angel of the Lord gives him a visual representation of who he will become. He clothes him in fine garments and gives him a clean turban for his head.

Satan is concerned with Israel’s past, but God see’s their future. The angel gives instruction, saying if Joshua will follow his commands, he will give him a place in his courts. He will restore Israel and use Joshua to redeem what was lost.

When the enemy reminds us of our past failures, God shows us our redeemed future.

He stands with us in the fire, and we never have to fight against our accuser alone. But we must arm ourselves with his Word. We must put ammunition against the lies in our belts and not be afraid to use it.

If we do, the result is inevitable. Because half-truths can’t stand against the source of all truth.

God doesn’t clothe us with our insecurities, mistakes and doubts. He clothes us with himself. And because of that, we are not slaves to our shortcomings. We are free.

I can’t tell you the number of times someone has

His goodness will follow you into the unknown, int

Hello on this rainy Friday! Everything in me said

You won’t know if you don’t try. This is what

We weren’t created to walk through this life fig

If you’re anything like me, you may sometimes th

No matter how long we’ve been walking with Jesus