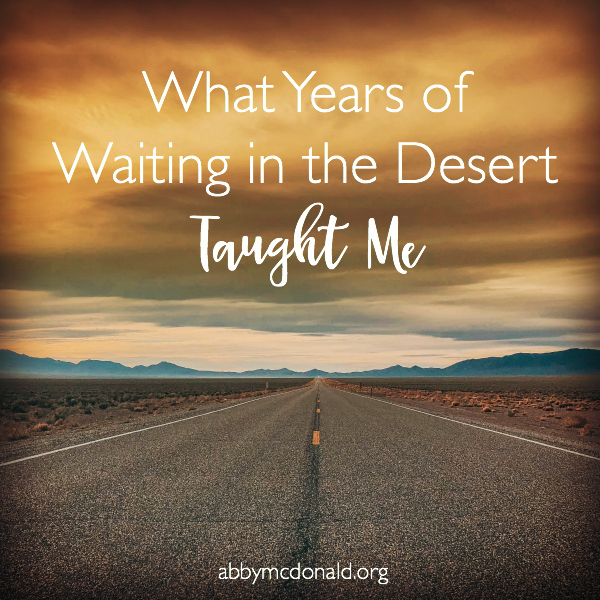 “Blessed is she who has believed that the Lord would fulfill his promises to her!” Luke 1:45 NIV

Little did I know how much I would need to hold onto those words in the months to come. I walked away from the famous author with my Christian Writers Market Guide under my arm, unsure of what he wrote until I reached my hotel room. When I saw the verse, I felt certain it was a sign. A publishing contract was ahead.

God, I believe. Help my unbelief.

And it was sign. It was a message to give me hope and endurance for the future. But what I thought would happen in a few weeks ended up taking five years. The fulfillment of the promise would take many seasons of hard work, perseverance, and prayer.

If I’m completely honest, there were times I felt like giving up. Waiting in what appears to be a desert of deferred hope and longing is hard. Pursuing a goal through periods when the fruit is sparse and lacking can make you feel like you’re chasing a mirage.

But can I tell you something? The waiting is not wasted time. Even when we don’t see the results we hope for or the outcome we want, God is working.

He refines us as we shift our focus from the object of our desire to the Giver. From the dream to the Creator.

During those months and years when I wondered what God was doing, he made me a better writer. He gave me a heart to help other writers who were beginning their journey, and a desire to share things I’d learned along the way.

At the beginning of 2018, I sensed God moving. He placed a promise of harvest in my heart, but for months I didn’t tell anyone but my husband. To be honest, I was afraid. I felt like Gideon in the story where God called him to defeat the Midianites and Amalekites, laying out my fleece before God.

There were two specific areas where I felt we would see reaping after years of sowing. First, the sale of a house that sat unsellable for seven years on the other side of the country. And two, a partnership with a publisher.

After a few more months of waiting, praying, and doing what God asked me to do, I shared the promise with a few close friends. It was a declaration of faith. God would deliver.

Can I tell you something? God likes to amaze us. He likes display his goodness in ways we know could only be him.

On July 11th, on the same day our house across the country sold, I received an offer for my first book. Only God.

And yesterday, I signed the contract.

Friend, I don’t know where you are today. I don’t know if you’re in a season of waiting, longing to see a promise fulfilled, or if you’re on a mountain. But wherever you are, I’d like to encourage you.

Here are three things I could have only learned through the waiting:

It means he is preparing us. It means we may not be ready to receive what he’s going to do. But at the right time, he will deliver. His faithfulness does not depend on our successes and victories. His faithfulness is who he is.

There are lessons I have learned through waiting that I could not have learned any other way. If God had immediately given me my heart’s desire, I wouldn’t have learned perseverance and true faith. Faith not defined by what we see, but our hope when we see nothing at all.

Far from it. There will always be more work to do. And as long we’re on this planet, there will always be another step in the journey. We are continually being transformed into the image of our Creator and he will refine us until Christ returns. New goals and dreams will emerge. More waiting will come.

But no matter what, his work is done. God already sees what’s on the other side and he is our victory. Whether we’re still meandering through the desert or we see the promised land, his character is steady and unchanging.

Stand firm on the truth of who he is today. His Word will never come back void.

Do you have big goals for your writing in 2022, bu

POSSIBILITY Our words hold a world of possibilit

A prayer for today: God, may our words be those th

Shortly after having my third child, I went throug

Happy birthday to this man who always is in my cor

Earlier this week on the black hole of opinions th

It started with a little insomnia. More than once

Today’s message was such a needed word as we ent

If your January is off to a slow start, you’re n