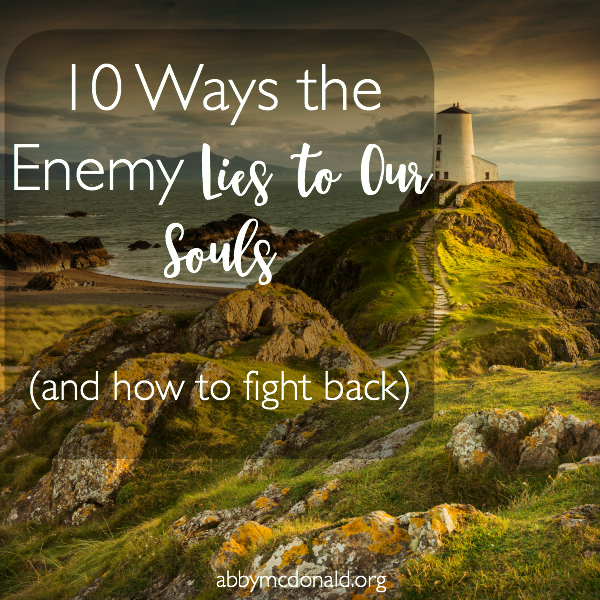 Sometimes I wish the enemy would announce himself with a blaring trumpet. Wouldn’t it be easier to avoid his traps if this type of announcement were his style?

However, this isn’t how Scripture depicts him. He prowls. He deceives. He waits and he watches for an opportune time. It doesn’t seem like he’s in a rush to carry out his schemes.

I can’t tell you the number of times I’ve fallen for a lie that had just enough truth woven into it to deceive me.

It sounded true. It even had a little bit of his Word in it. But there was no foundation. Upon further examination, what appeared to be solid crumbled like ash before my eyes. It was an empty shell with a shiny exterior. Nothing more. But you know what? I have good news.

Our enemy is not creative.

If we examine Scripture, we see he’s using the same tactics he used hundreds of years ago on believers today. Sometimes he changes the angle, but the heart of the deception is the same. And do you know what’s even better news? We have a Helper who strengthens us and enables us to discern the truth.

Here are some ways the enemy tries to deceive us and what God has given us as an escape. Continue reading at iBelieve.com…

I had the honor of writing for the Brave Women ser

My husband and I attended our first concert in ove

Don’t miss the beauty of the journey you’re on

There is a fine line between being vulnerable and

Sometimes I get caught up in what everyone else is

While making one of those “I just have to get ou

Can I be completely honest? The term “forever ho